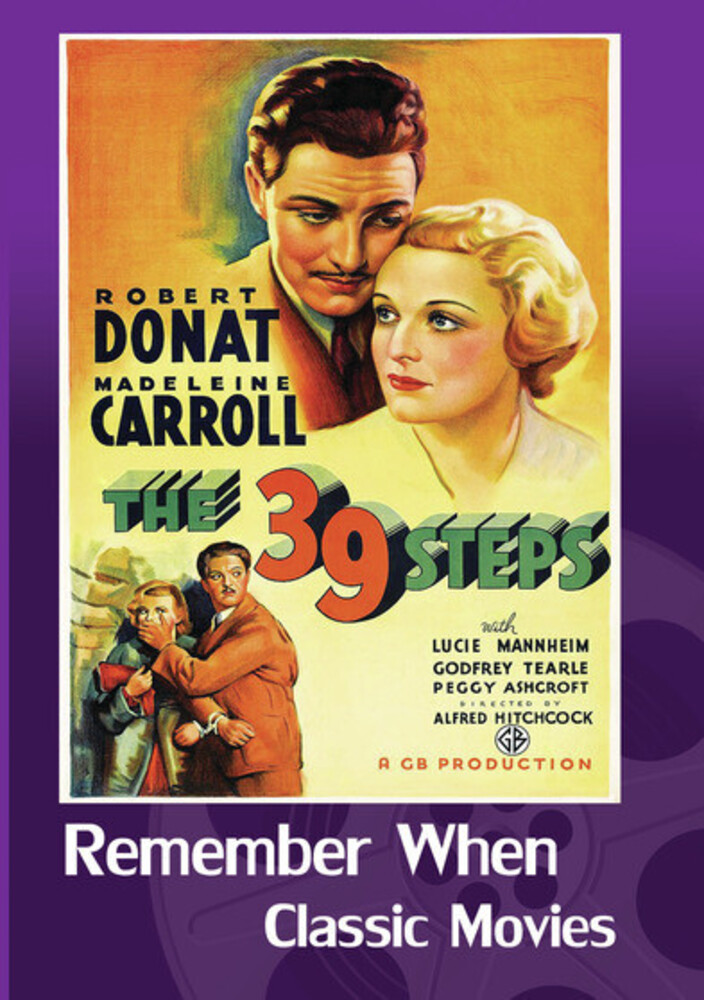 The 39 Steps is a British thriller film directed by Alfred Hitchcock and starring Robert Donat and Madeleine Carroll. At a London music hall theatre, Richard Hannay (Robert Donat) is alarmed when he hears gunshots being fired. In the ensuing panic Hannay finds himself holding a frightened Annabella Smith (Lucie Mannheim), who talks him into taking her back to his apartment. Annabella then tells Hannay that she is a spy being chased by assassins, and that she has uncovered a plot to steal vital British military information, masterminded by a man missing the top joint of one of his fingers. She mentions 'The 39 Steps', but does not explain the phrase. Later that night, Annabella bursts into Hannay's bedroom after she has been fatally stabbed and warns him to flee. Hannay escapes to Scotland since he found a map of the Scottish Highlands clutched in Annabella's hand. Hannay later discovers that he is the subject of a nationwide manhunt for Annabella's murderer. While on a train to Scotland, he enters a compartment and starts kissing the sole occupant, Pamela, (Madeleine Carroll) in a desperate attempt to escape detection. She alerts the police, who stop the train on the Forth Bridge, and Hannay escapes Hannay escapes several more attempts to arrest him, but when a sheriff reveals that he does not believe Hannay's story of events, the police take him into custody with Pamela. When Hannay realizes the police car is going in the wrong direction it becomes clear to him that they are agents of the conspiracy. This is a fast-paced and moving thriller of a movie and the ending may just surprise you! (Black & White)