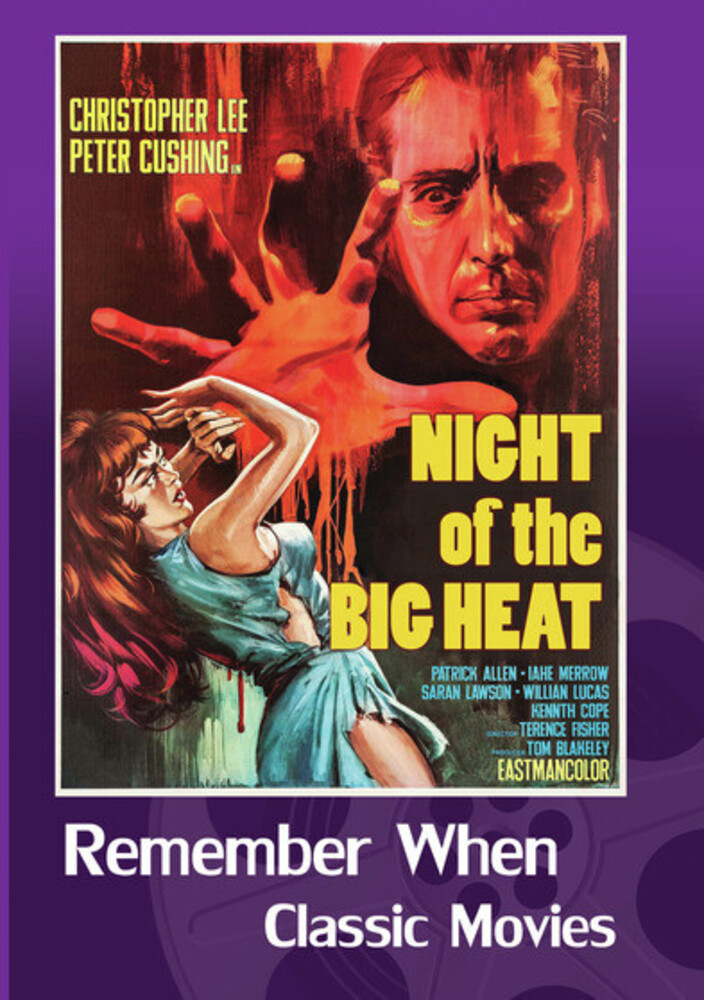 Night of the Big Heat is a 1967 British sci-fi film starring Patrick Allen, Christopher Lee, Peter Cushing and Jane Merrow. Jeff (Patrick Allen) and Frankie Callum (Sarah Lawson) run The Swan, an inn on the island of Fara, somewhere off the English coast. In the middle of winter the island is experiencing a heat wave with temperatures rising so rapidly that cars stall, beer bottles shatter, televisions explode, and telephones cease to work. A tramp is burned to death in a cave by something emitting a high-pitched whirring sound. A farmer's sheep are found dead after having been badly burned. Bob Hayward (Thomas Heathcote), a regular at the Inn is attacked by something on the road and crashes his car after being blinded by a bright light. Godfrey Hanson (Christopher Lee) is a mysterious scientist who comes to The Swan and explores the island with motion-sensitive cameras and takes soil samples. According to Hanson, the island is an invasion site for extraterrestrials whose extremely high temperatures burn any living creature that gets too close to them. Jeff and Hanson resolve to stop the aliens with the help of local physician Dr. Stone (Peter Cushing), but when Stone tries to get to the meteorological station to alert the mainland of the invasion, he is waylaid and killed by the aliens. It soon becomes clear that the aliens have destroyed all communication equipment, making it impossible to call for help. Hanson formulates a plan to set fire to bales of hay in a field, to attract the aliens and then throw dynamite into the field to destroy the aliens while the others signal for help with flare pistols. The plan quickly fails and Hanson and the others are killed by the aliens. The situation looks hopeless when a sudden thunderstorm breaks. Will the aliens survive? What will become of the villagers and their island? This is a magnificent sci-fi thriller and one of a kind movie! They don't make films like this any longer and this is an unforgettable one!